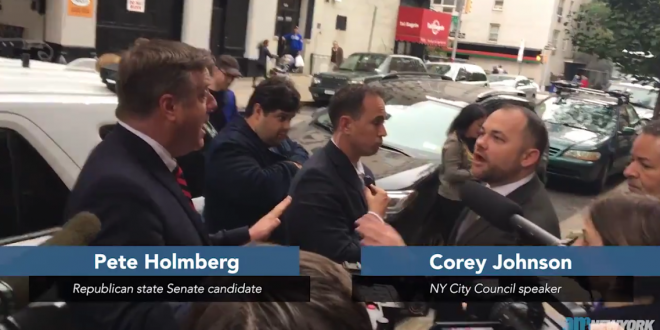 The Metropolitan Republican Club has stood perhaps most forcefully behind McInnes and the Proud Boys. On Sunday, the group put out a statement touting their support for free speech, adding that “Gavin’s talk on Friday night, while at times politically incorrect and a bit edgy, was certainly not inciting violence.”

Members of the club have also come to the defense of McInnes’s First Amendment rights—defined, in this case, as his right to reenact a political assassination in front of a paying audience at the New York City Republican headquarters.

During a press conference held by City Council Speaker Corey Johnson on Monday, an irate state Senate candidate and Metropolitan Club member, Pete Holmberg, interrupted Johnson to declare, “I hate Gavin McInnes, but I will defend his right to speak! That’s the First Amendment, Corey.”

Watch the video below. Holmberg, who is apparently a big fan of Milo Yiannopoulos, is running to be my state Senator. Incumbent Democrat Liz Kreuger won by 48 points in 2014, so Holmberg’s chances are less than slim.

Scene as @NYCSpeakerCoJo held a presser outside the @metgopclub, denouncing the Club for hosting Gavin McInnes Fri. & demanding arrests of McInnes supporters involved in a street fight afterwards. He also condemned vandalism of the Club that occurred ahead of McInnes’ appearance pic.twitter.com/r8OGSpexXj

.@PeteHolmbergNYC, GOP state senate candidate (SD 28) & @metgopclub member briefly commandeered @NYCSpeakerCoJo‘s lectern ahead of the presser, w/ Johnson & the other Dem electeds not yet on scene. Holmberg’s campaign HQ is the clubhouse. pic.twitter.com/mIoeOEdjqq

.@PeteHolmbergNYC voiced complaints to @NYCSpeakerCoJo as Johnson arrived, including bringing the press to his campaign HQ & not inviting any Republicans to the presser. pic.twitter.com/ZPeMcDHGsB