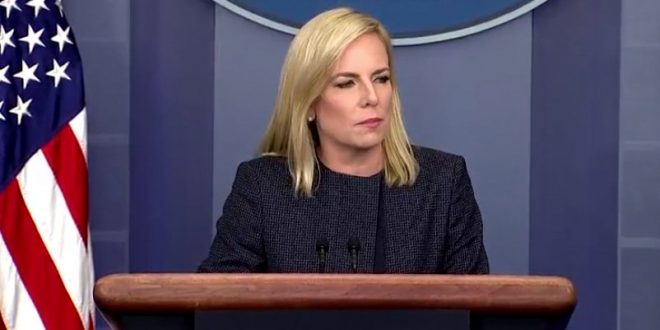 The U.S. military has received a request from the Department of Homeland Security for active-duty troops on the U.S.-Mexico border, a U.S. official said on Thursday, after President Donald Trump said he was “bringing out the military” to guard against a caravan of Central American migrants trekking through Mexico.

The U.S. official, speaking to Reuters on condition of anonymity, said the U.S. military was examining the request that could require deploying between 800 and 1,000 active-duty troops to the border to assist with logistics and infrastructure.

The U.S. official said that any troops deployed to the border would not be involved in “law enforcement” activities, something that would be prohibited by a federal law dating to the 1870s.

Defense Secretary Mattis is expected to sign deployment orders that could send 800 or more troops to the border to help border patrol authorities stop a caravan of migrants moving through Mexico to enter the US, according to administration officials https://t.co/Pz8HmXY7qn pic.twitter.com/LiNmBUYsJI

The refugees have months of walking before reaching the border – if they make it.

Our military can’t do more than logistics support.

Trump is using our military to make this look urgent, for midterm elections. HUGE misuse of our troops and media should report on it, as such. https://t.co/m5bLifLfqx

President Trump will order roughly 800 United States Army troops to the southern border as he warns about a migrant “onslaught” https://t.co/cGUKcgNNPn

Trump expected to send 800 troops to secure the border as the migrant caravan slowly approaches.

We have been embedded with the caravan all week.

Look at this photo. This is who is coming. https://t.co/dayrszCPDe via @nbcnews pic.twitter.com/UstesT8b6S

Previous Graham: I Won’t Blame Trump For “Nut Job” Bomber
Next REPORT: Mueller Is Closing In On Birther Jerome Corsi