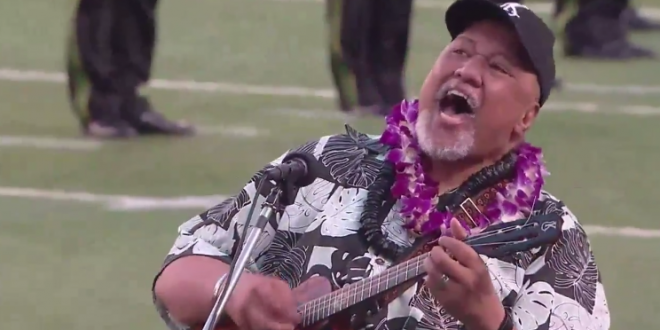 Hawaiian singer and musician Willie K. stunned the crowd at Aloha Stadium in Honolulu on Saturday with a stirring new take on the national anthem.

Accompanied by his ukulele, he dispensed with the traditional melody and went with his own for “The Star-Spangled Banner” prior to the game between the University of Hawaii and University of Nevada, Reno.

The result turned Willie K. ― a local legend known for his virtuoso skills on both the ukulele and guitar ― into a viral superstar overnight.

As you’d expect, there are some critics.

I can assure you you have never seen the Star-Spangled Banner performed like this before. pic.twitter.com/Rc8eO9uPid

I think it’s horrible at best. The National Anthem isn’t a song you can make your own. The song was owned by a country and it’s lyrics etched in blood. It’s not a game show song, so quit playing with it. Sing it as it is written.

Actually it’s a poem set to the music of a fraternity song about having a huge penis but please go on https://t.co/LHgKY7EgoI

https://t.co/5kNEFyfKoE this is from our broadcast, with your requested 3 seconds plus 👏🏻👏🏻👏🏻 enjoy!