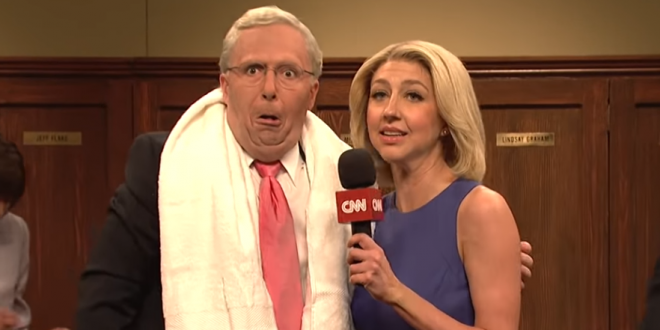 The Senate voted on Saturday afternoon to confirm Brett M. Kavanaugh as a Supreme Court justice by the narrowest margin in more than a century. Later that day, Republican lawmakers celebrated raucously — on “Saturday Night Live,” at least.

Then there was Cecily Strong’s Susan Collins, who said, “The last thing I wanted was to make this about me. That’s why I told everyone to tune in at 3:00 p.m. to tell all my female supporters, psych!” She added, “Listen, I think it’s important to believe women until it’s time to stop.”

Meanwhile, over on the “losing team,” a sad Senate Minority Leader Chuck Schumer said, “Well, the Dems lost another one. We thought this time would be better than the Anita Hill hearing because Dr. Ford was white, but turned out Brett Kavanaugh was white too and we were completely blindsided by that.”