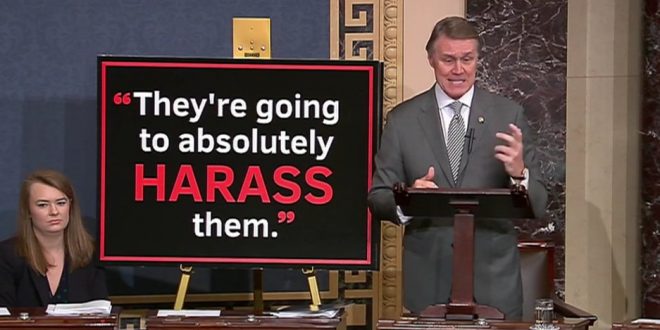 Sen. David Perdue (R-Ga.) on Wednesday described those protesting Brett Kavanaugh’s nomination to the Supreme Court as “paid activists”. Appearing on Laura Ingraham’s syndicated radio show, Perdue said that Republicans should not be swayed by protestors and should “grow up and start playing defense.”

“These are not genuine people who are concerned about Dr. Ford or anything else, these are paid activists,” he said.

“This is a George Soros conspiracy, and it’s time we wake up, expose them, stand up and fight for our country, because that’s what’s at stake here,” Perdue added, referring to the billionaire activist who has donated to liberal social causes.

The liberal activists who cornered him and his wife Bonnie in Reagan National Airport on Monday, he said, were incited by Democrats furious about President Trump’s second Supreme Court nominee.

In a searing 10-minute speech on the Senate floor, Perdue said Democrats had “gone one tick too far,” comparing his colleagues’ tactics to those utilized the German paramilitary forces that aided Adolf Hitler’s rise to power in the 1930s.

“These are the tactics of the Brownshirts in Germany in the 1930s,” Perdue said. “Unacceptable. Totally irresponsible.”

WATCH: @sendavidperdue refuses to shake hands with survivors who are trying to share their stories with him. “Don’t touch me” he says when our co-ed @jeppsaddison reaches out.

Fine. You don’t want to be touched. Yeah, neither do women. #Stopkavanaugh#CancelKavanaugh pic.twitter.com/Vmq5vzxECx