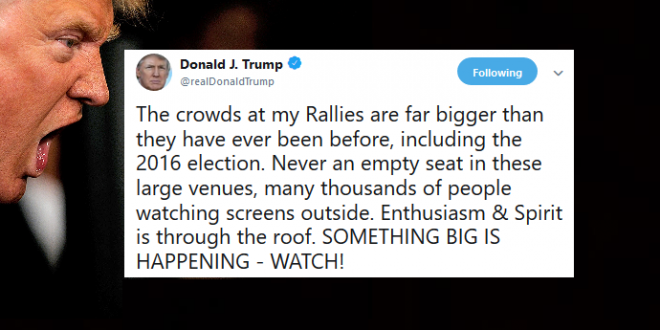 Glorious Leader: My Rallies Are Bigger Than Ever

President Trump said Monday that the large and boisterous crowds he’s seeing as he holds rallies around the country is a good sign for Republicans as they head toward a midterm election that many think could give Democrats control of the House, and maybe even control of the Senate.

The GOP is working up its base to keep a majority in both chambers of Congress, while Democrats continue to claim a “blue wave” is coming in November that will give them the ability to block Trump’s agenda.

The crowds at my Rallies are far bigger than they have ever been before, including the 2016 election. Never an empty seat in these large venues, many thousands of people watching screens outside. Enthusiasm & Spirit is through the roof. SOMETHING BIG IS HAPPENING – WATCH!