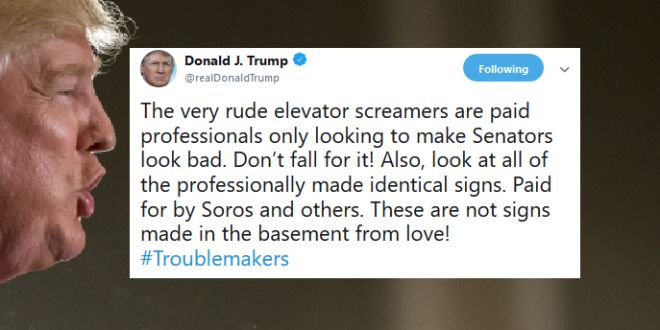 No doubt he got this from Fox & Friends.

President Trump on Friday attacked protesters demonstrating against Supreme Court nominee Brett Kavanaugh, asserting without evidence that they are “paid professionals.” Trump claimed that billionaire liberal activist George Soros is among those funding the demonstrations against the judge, who has been accused of sexual misconduct by multiple women. He did not provide evidence for his claim.

The very rude elevator screamers are paid professionals only looking to make Senators look bad. Don’t fall for it! Also, look at all of the professionally made identical signs. Paid for by Soros and others. These are not signs made in the basement from love! #Troublemakers