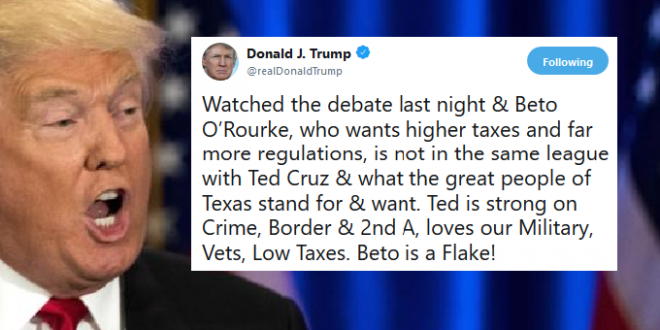 President Trump on Wednesday attacked Rep. Beto O’Rourke (D-Texas), calling him a “flake” and saying he “is not in the same league” as his opponent in the Texas Senate race, incumbent Sen. Ted Cruz (R). Trump, who often attacked Cruz while campaigning against him in the Republican presidential primaries in 2016, added in a second tweet that Cruz “has done so much for Texas” and said O’Rourke “would blow it all.”

Watched the debate last night & Beto O’Rourke, who wants higher taxes and far more regulations, is not in the same league with Ted Cruz & what the great people of Texas stand for & want. Ted is strong on Crime, Border & 2nd A, loves our Military, Vets, Low Taxes. Beto is a Flake!

Ted Cruz has done so much for Texas, including massive cuts in taxes and regulations – which has brought Texas to the best jobs numbers in the history of the state. He watches carefully over your 2nd Amendment. O’Rourke would blow it all! Ted has long had my Strong Endorsement!