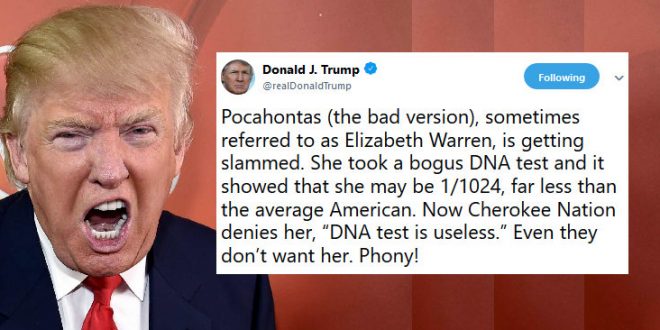 President Trump on Tuesday slammed Sen. Elizabeth Warren’s (D-Mass.) claims of Native American heritage as a “scam and a lie” one day after the senator revealed she had a distant Native American ancestor. The tweets came after Trump initially brushed off Warren’s DNA test, telling reporters “who cares” and denying that he offered the senator $1 million for a charity of her choice if she took such a test. He later reversed course, saying he would make the donation only “if I can test her personally.”

Pocahontas (the bad version), sometimes referred to as Elizabeth Warren, is getting slammed. She took a bogus DNA test and it showed that she may be 1/1024, far less than the average American. Now Cherokee Nation denies her, “DNA test is useless.” Even they don’t want her. Phony!

Now that her claims of being of Indian heritage have turned out to be a scam and a lie, Elizabeth Warren should apologize for perpetrating this fraud against the American Public. Harvard called her “a person of color” (amazing con), and would not have taken her otherwise!

Thank you to the Cherokee Nation for revealing that Elizabeth Warren, sometimes referred to as Pocahontas, is a complete and total Fraud!