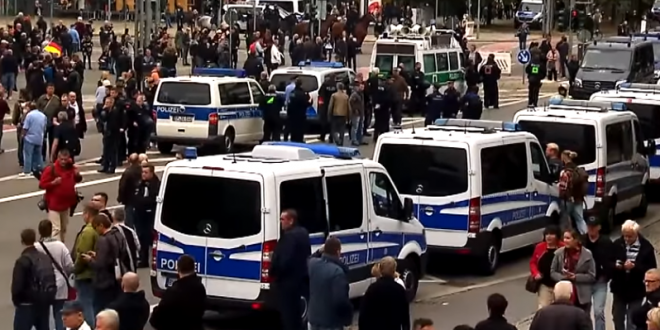 Germany’s state prosecutor has ordered the arrest of six men charged with forming a far-right terror group known as “Revolution Chemnitz.” The men are accused of planning attacks on migrants in eastern Germany.

Some 100 police officers raided several properties in the German states of Saxony and Bavaria early on Monday morning as part of an investigation into a far-right terror group called “Revolution Chemnitz,” named after the eastern German city that was the scene of recent far-right demonstrations following the killing of a German man allegedly by migrants.

The six men arrested, aged between 20 and 30, are suspected of forming a terrorist organization under the leadership of 31-year-old Christian K., who had already been arrested on September 14.  According to Germany’s state prosecutors, the men were planning attacks on “foreigners” and people who did not share their political views. Batons, an air-rifle, and computer hard drives were seized during the raids.

On Sept. 14, the authorities said, five of the suspects took part in an attack on foreigners in Chemnitz. The authorities said that event appeared to have been a rehearsal for an action planned for Oct. 3, a national holiday celebrating the reunification of Germany.

Since the violence in Chemnitz began, the extent to which far-right extremist groups have been active in the country has been a point of dispute. The German government formally counts 83 people as having died in far-right violence since 1990, but an investigation by the news outlets Tagesspiegel and Zeit Online found that 169 people had been killed by neo-Nazis or other extremists.

It was not immediately clear if any of the men arrested were among those giving the stiff-armed Nazi salute or shouting anti-foreigner slogans in the demonstrations in Chemnitz, which led to a bitter dispute that nearly split Chancellor Angela Merkel’s government.