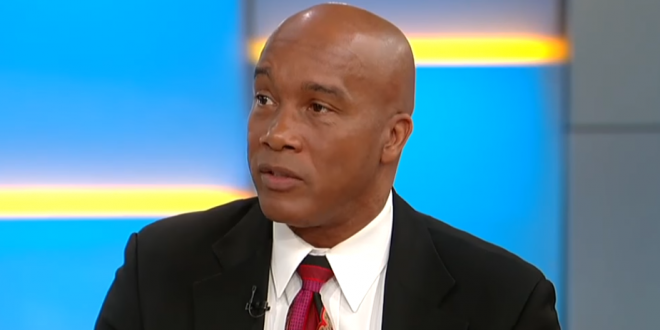 “Kevin Jackson has been terminated as a contributor. His comments on today’s hearings were reprehensible and do not reflect the values of FOX News,” a spokesperson for the network said in a statement.

In his other tweets, Jackson said “Leftist women are skanky for the most part” and accused Democrats of waging a “war on men.”

The pro-Trump radio host spoke out about his firing on Joe Piscopo‘s radio show Monday morning and ripped Fox News for apparent hypocrisy. Jackson said “icon” Cosby now “sits in prison over 40-50 year ago allegations” because “some lying piece of crap leftist feminist who will say whatever they pay them to say or do.”

“Ed Henry was hanging out with strippers while he was married, and he’s got a show,” Jackson said. “Jesse Watters, who just recently divorced his wife, or is in the process, and he’s hanging out with some young chick that he did.” “If that’s what Fox decides they want to have on, congratulations to them,” he said.

Jackson last appeared on JMG in December 2017 when he suggested that the FBI was plotting to assassinate Trump.

I disagree. Feminists are their own worst enemies, and enemy of women.

Also, they want men to NEVER be believed. I’m not succumbing.

TO HELL with the notion that women must be believed no matter what. Lying skanks is what these 3 women are, and we ALL know more#TeamKJ https://t.co/qGVJLTv6QI

They see what the #feminist FRAUDS are trying, and fear for their sons.

I’m buying my first music in DECADES and it will be @kanyewest latest.

After being fired from #FoxNews, I too am FREE

I said what I believed and always have. It cost me a lot, but I HAVE NO REGRETS!

Thanks for a great song, Ye!#TeamKJ