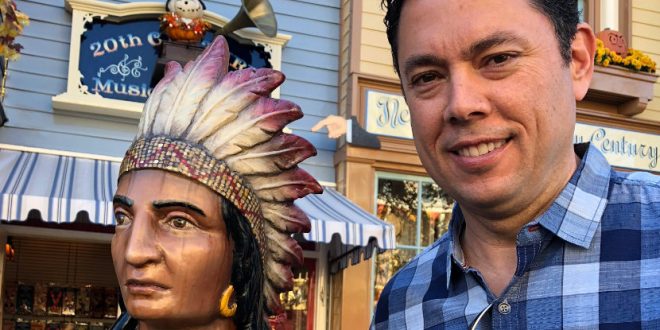 Former Republican lawmaker Jason Chaffetz mocked Sen. Elizabeth Warren on Thursday by posing with a wooden statue of a Native American, joking that it was the Massachusetts Democrat. Warren has been criticized and made fun of for releasing DNA test results earlier this week in an effort to prove her ancestry claims.

The results showed Warren may be between 1/1,024 and and 1/64 Native American. Trump called her a “phony,” while Sen. Lindsey Graham said he also planned on taking a DNA test because he had been told his grandmother was “part Cherokee Indian.” “I’m dying to know,” Graham told “Fox & Friends.” “I think I can beat her.”

Nothing embarrasses Jason Chaffetz. Remember when he said he could not look his 15-year-old daughter in the eye if he supported Donald Trump—and then supported him? Over and over? https://t.co/JzjMXVd1NM

Let’s be clear: All this conservative trollery doesn’t mock *Warren*—it mocks *Native Americans*. Chaffetz used the mascot-stereotype of the cigar-store Indian as his proxy for Natives because he & the rest of the GOP do not actually give a crap about respect for Native identity. https://t.co/C58hd5YVnV

Previous Trump: “It Certainly Looks Like” Khashoggi Is Dead
Next Catholic Exorcist To Hold Special Mass To Protect Brett Kavanaugh Against Curses From “Evil” Brooklyn Witches