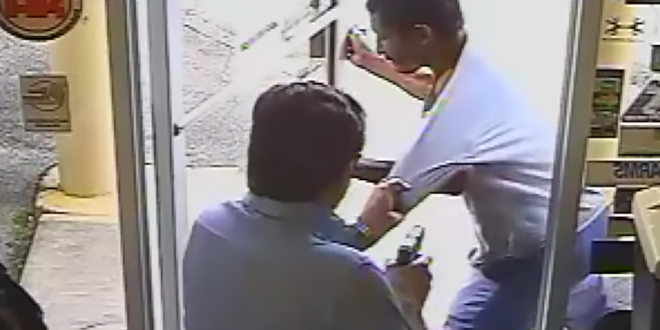 Lakeland police have released surveillance video showing a city commissioner shoot a man who was trying to steal a hatchet from his military surplus store. Michael Dunn is a Lakeland City Commissioner who took office in January of 2018. The shooting happened Oct. 3 at the Vets Army Navy Surplus which is owned by Dunn.

The video shows the city commissioner trying to detain Lopez with his left hand and then shoots him with a semi-automatic Glock handgun in his right hand as Lopez tried to make a break. Lopez has the stolen hatchet in his right hand and is not threatening Dunn with the hatchet at the moment of the shooting, but seems intent on getting away.

The fatal shooting has attracted a great deal of attention due to Dunn’s prominence as a local politician and the Stand Your Ground law. Dunn’s lawyer says he has not decided whether that will be a defense in this case.

Police are investigating whether Dunn was justified in using deadly force against the alleged shoplifter. Authorities have not arrested Dunn and the State Attorney’s Office is reviewing the case, Lakeland police spokesman Gary Gross told Newsweek on Monday.

Dunn is a vocal advocate of gun rights. In July, he hosted a demonstration at his store to protest a rally being held nearby by March For Our Lives, a gun control advocacy group formed by survivors of the Stoneman Douglas High School shooting, which occurred in Parkland, Florida.

From earlier this year:

Republican Congressional Candidate Ed Shoemaker is hosting a “Rally for America” Saturday morning in Munn Park by the Confederate monument. The event invitation on Facebook reads: “This event is a rally of patriots who are gathering to protect our 2nd Amendment, respect America’s historical monuments, and prevent Sharia Law in our courts.” Speakers include Michael Dunn, Lakeland City Commissioner. There will also be a gun raffle on site.