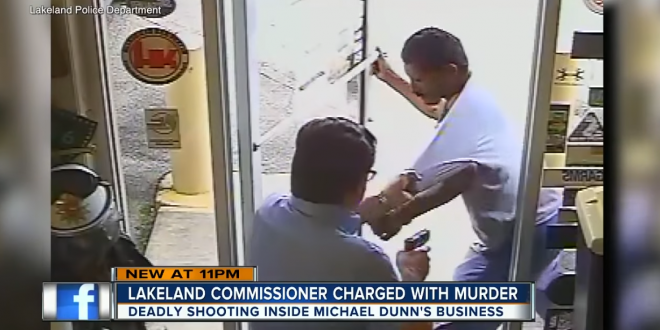 Lakeland City Commissioner Michael Dunn will remain in jail without the chance to post bail following his indictment Friday on a charge of second-degree murder. Dunn, 47, had his first court appearance Saturday morning before Judge Bob Grode at the Polk County Courthouse in Bartow. Grode ordered Dunn to be held without bond.

Dunn was arrested Friday after a grand jury indicted him in the Oct. 3 fatal shooting of a man attempting to shoplift a hatchet from his Lakeland business, Vets Army Navy Surplus Store at 819 N. Florida Ave. District 10 Medical Examiner Dr. Stephen Nelson conducted an autopsy and determined that Christobal Lopez died of two gunshot wounds.

According to Dunn’s arrest affidavit, video surveillance showed Lopez remove a hatchet from a display rack inside the store and conceal it in the front of his pants and underneath his shirt. After Lopez’s father made a purchase at the front counter, the pair begins to leave the store when Lopez is confronted by Dunn about paying for the hatchet.

“The hatchet falls down the victim’s pant leg onto the floor. The victim picked up the hatchet, at this time, according to witness [redacted], the victim made the statement, ‘I will pay, I will pay!’ as he walked back toward the cash register counter area.

“At no time did the victim (Lopez) appear to have made any threatening movements towards the suspect (Dunn),” the arrest affidavit reads.

As I noted in my first report, Dunn once gave a speech at a pro-Confederacy rally and later staged his own rally against the Parkland students.

JUST IN: Mugshot of Michael Dunn, who is now booked into #Polk County jail. @FOX13News pic.twitter.com/sHtwdBMNZK

“This is merely the beginnings what is expected to be a very long process.”- State Attorney Brian Haas about the arrest of Lakeland Commissioner Michael Dunn. @FOX13News pic.twitter.com/9BzfH1napy