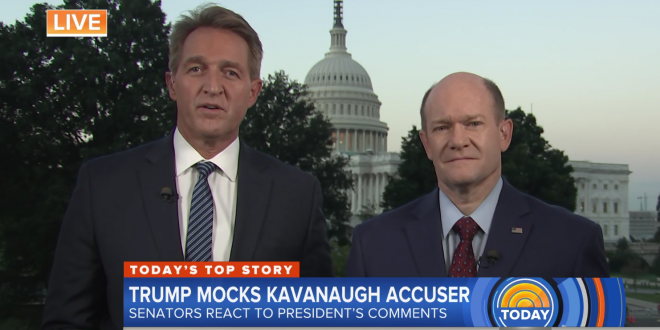 Sen. Jeff Flake criticized President Donald Trump for mocking Christine Blasey Ford at his rally on Tuesday night, in an appearance on the Today Show alongside Sen. Chris Coons.

“There’s no time and no place for comments like that,” the Arizona Republican said. “And to discuss something this sensitive at a political rally, is just not right. I wish he hadn’t have done it. It’s kind of appalling.”

Guthrie asked Coons if he thought that was rushed, and the senator said an early finish to the investigation “would concern me.”

“There’s no time and no place for remarks like that. But to discuss something this sensitive at a political rally is just not right…It’s kind of appalling.” @JeffFlake on President Trump’s comments about Dr. Ford at a rally last night pic.twitter.com/6SaTLZK899