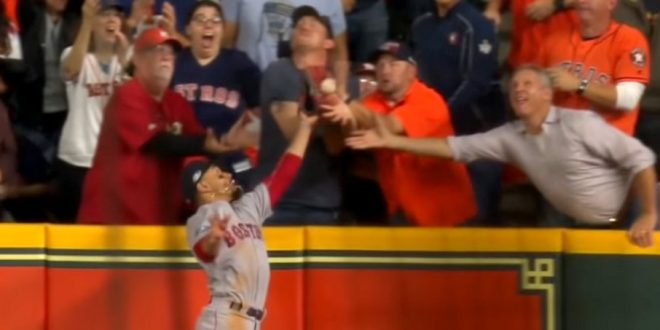 The Houston Astros aren’t blaming any fan, or even a veteran umpire’s call, but they were left seething Wednesday night believing that Major League Baseball cheated them out of a possible victory for having too few cameras and an inferior replay booth.

“I’m pissed off, we’re all pissed off,” Astros right fielder Josh Reddick said. “That’s the best way to describe it. Frustration, and beyond that, to being pissed off because it would have made a big difference. “We talked about it during the whole course of the game.”

The Astros, convinced that MLB robbed them of a two-run homer by Jose Altuve when replay officials in New York upheld right-field umpire Joe West’s ruling of fan interference, now are on the brink of elimination. They lost 8-6 to the Boston Red Sox and trail 3-1 in the American League Championship Series.

In the bottom of the first inning, Houston Astros designated hitter Jose Altuve launched a fly ball to the right-field wall that prompted Boston Red Sox right fielder Mookie Betts to go into a full jump. As Betts extended his arm high over the 7-foot wall, the ball bounced back onto the field of play.

Replays appeared to show that Betts’ left arm stretched over the wall and into the sea of fans. As he tried to make the catch, Betts’ glove closed a split-second too early. He says it was because the glove made contact on its back side with a fan’s hands. From there, the ball touched another fan before coming back onto the field.

“I was pretty positive that ball was going in my glove,” Betts said. “But as I jumped and went over, reached my hand up, I felt like somebody was kind of pushing my glove out of the way or something.”

You may recall that a similar 2006 playoffs incident resulted in death threats for a Chicago Cubs fan, who later had to go into hiding after being escorted from Wrigley Field under police protection.

Here’s Troy Caldwell. He was the fan who was ruled to have interfered with the Astros potential home run ball. “I’m going to need security to escort me out of here if the Astros don’t come back to win this.” pic.twitter.com/IXE2uEzSoW