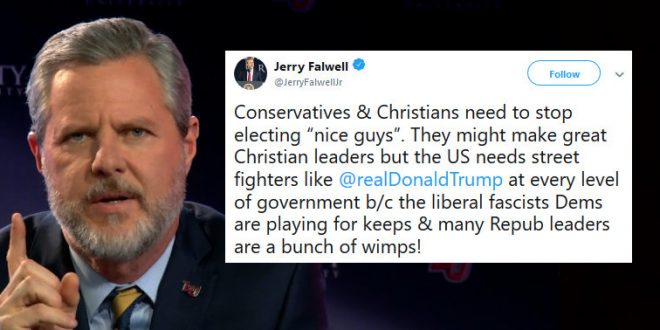 Liberty University President Jerry Falwell Jr. implored conservatives and Christians to support “street fighters” over “nice guys” in order to defeat the Democratic Party’s agenda. Falwell, a staunch supporter of President Trump, referred to current Republican lawmakers as a “bunch of wimps” in a tweet Friday night. The tweet comes as Senate Republicans have given into the demands of their Democratic colleagues for an FBI investigation into the sexual assault allegations against Supreme Court nominee Brett Kavanaugh.

Conservatives & Christians need to stop electing “nice guys”. They might make great Christian leaders but the US needs street fighters like @realDonaldTrump at every level of government b/c the liberal fascists Dems are playing for keeps & many Repub leaders are a bunch of wimps!