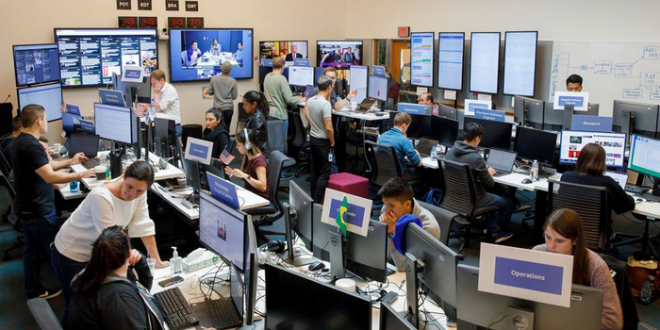 Facebook is promoting a new “war room” as a part of its solution to election interference, unveiling a team of specialists working to stop the spread of misinformation and propaganda. It’s unclear how well it’s working.

The Silicon Valley company, which has faced intensifying scrutiny over its role in amplifying malicious political content, opened its doors to reporters to tour a new workspace at its Menlo Park headquarters on Wednesday.

Engineers, data scientists, threat investigators and other Facebook experts from 20 teams recently began collaborating inside the so-called “war room”, a term that political campaigns typically use to describe operation centers.

Inside the room are dozens of employees staring intently at their monitors while data streams across giant dashboards. On the walls are posters of the sort Facebook frequently uses to caution or exhort its employees. One reads, “Nothing at Facebook is somebody else’s problem.”

That motto might strike some as ironic, given that the war room was created to counter threats that almost no one at the company, least of all CEO Mark Zuckerberg, took seriously just two years ago — and which the company’s critics now believe pose a threat to democracy.

Days after President Donald Trump’s surprise victory, Zuckerberg brushed off assertions that the outcome had been influenced by fictional news stories on Facebook, calling the idea “pretty crazy.”

Employees gazed at constantly updating charts on several large video screens to monitor things like potential “voter suppression” campaigns or spam operations intended to mislead U.S. users. The room felt a bit cramped because the staff members were working in such close proximity to each other.

An American flag was placed on one wall, while a Brazilian flag was on another, indicating the team’s work monitoring the polarized elections in the South American country. Facebook executives said that there will likely be staff working in the room all day in the lead up to the U.S. elections.

Employees look for suspicious spikes in spam and hate speech, in some cases using custom software built for the purpose. They look for efforts at voter suppression, such as falsely telling people that lines are long or that the election has been delayed.

Previous Eric Trump: We Have Zero Investments In Russia, Zero In Saudi Arabia, Nothing To Do With Either Country
Next Fan Interference Call Riles Baseball Playoffs [VIDEO]