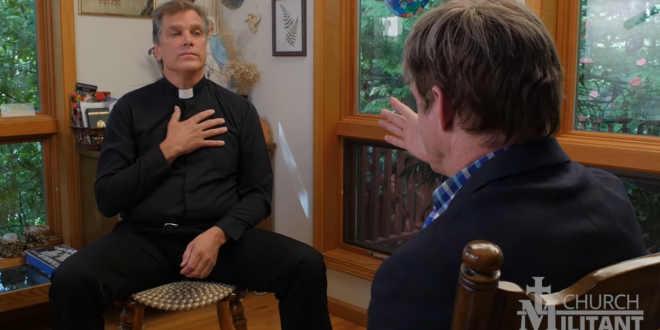 From the crowdfunding site Funding Morality:

Chicago priest Father Paul John Kalchik is being persecuted by his bishop Cardinal Blase Cupich and was forced into hiding on September 21st after Cardinal Cupich threatened to have him committed to a psychiatric treatment center. Kalchik’s offense? Burning a banner that had been unused for close to a dozen years that depicted a cross interwoven with a rainbow flag.

After the banner burning, LGBT activists loudly complained to the Chicago archdiocese, demanding that Father Kalchik be punished for what they claimed to be a “homophobic” act. Cardinal Cupich complied with the LGBT lobby’s demands, sending two of his priests to bully Kalchik into leaving his parish. Father Kalchik — who has committed no crime nor broken any laws nor suffers from any psychiatric problems — refused to leave his parish, where he has been pastor for 11 years.

Witnesses say that not only did these two priests use crude and threatening language in their confrontation, they also made a veiled death threat if Kalchik did not leave with them to be immediately taken to St. Luke’s Institute (a notorious mental health treatment center for clergy). The two priests then told Father Kalchik the police would be sent to take him away. Taking them at their word, Kalchik believed he had no choice but to go into hiding, where he remains now.

As you may recall, in a September interview with NBC News, Kalchik proudly cited the Leviticus bible verse calling for homosexuals to be executed.

From Funding Morality’s about page:

Funding Morality, a project of JIFGA, a not-for-profit 501 (c) 3 organization, began as a result of the denial by other “crowd funding” platforms to profile persons of faith who would not compromise their moral and biblical convictions and in turn have been persecuted by those who are intolerant of a Judeo-Christian worldview.

These crowd-funding platforms (which are mostly for-profit businesses) have often denied services to individuals who have lost their jobs, been harassed or persecuted for their politically incorrect views. We have expanded our focus to also permit projects consistent with the Noahide Laws (Judeo-Christian worldview) to appeal for funding.

JIFGA is the Jewish Institute for Global Awareness, which is the new name for the ex-gay group JONAH, which was ordered dissolved by a New Jersey court in 2015 after losing a fraud lawsuit filed by the SPLC on behalf of its victims. In March 2018, the SPLC wrote:

The SPLC filed a motion today asking a court to enforce an order requiring the complete dissolution of a fraudulent gay-to-straight “conversion therapy” provider that the court ordered to shut down nearly three years ago, but that continues to operate under a different name.

Just 11 days after the permanent injunction was issued, JONAH filed articles of incorporation for “Jewish Institute for Global Awareness (JIFGA),” which is essentially a continuation of JONAH. Not only does it have JONAH’s assets, leadership and core operations, but it has also maintained the same physical place of business and telephone number.