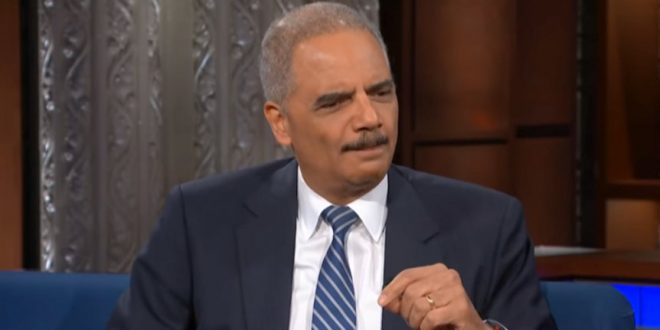 Eric Holder: When The GOP Goes Low, We Need to Kick Them, Don’t Do Anything Illegal, But We Gotta Fight

“Michelle [Obama] says, ‘When they go low, we go high.’ No, no. When they go low, we kick them,” Holder said during a campaign appearance in Georgia this past weekend. The comment, a riff of the former first lady’s famous quote, gained applause and cheers from the crowd.

“That is what this new Democratic Party is about,” Holder added. The former attorney general also said that those on the left are “proud as hell” to be Democrats and that in the upcoming election this November they are showing up to “win.”

What Eric Holder said in the same speech: “When I say kick them, I don’t mean do anything inappropriate. We don’t do anything illegal, but we gotta be tough and we gotta fight for the very things that John Lewis, MLK, etc. gave to us.” Get a life, hysterical Republicans. #GOPmob

Saying you’ll fact-check the media is spun as “violent rhetoric,” but it’s perfectly OK to call for bullying people in the streets (Maxine), increased incivility unless you have power (Hillary), or saying you’ll kick your opponents as Holder does here: https://t.co/hD6KrLDN49

So now all the white supremacists masquerading as “right wingers” are trying to pretend that Eric Holder saying “when Republicans go low, we kick them” is really a call to violence.

Black people, be on alert. They will use this to retaliate against innocent Black citizens

Democrats in the same week:

Former AG Eric Holder: “When they go low, we kick them.”

Hillary Clinton: “You cannot civil with a political party that wants to destroy what you stand for.”