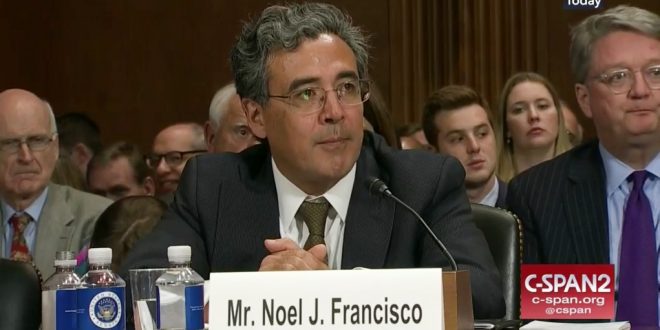 The Justice Department today told the U.S. Supreme Court that businesses can discriminate against workers based on their gender identity without violating federal law. Solicitor General Noel Francisco told the high court that a civil rights law banning sex discrimination on the job doesn’t cover transgender bias. That approach already has created a rift within the Trump administration, contradicting the Equal Employment Opportunity Commission’s view of the law it’s tasked with enforcing.

A Michigan funeral home wants the high court to overturn a U.S. Court of Appeals for the Sixth Circuit decision finding that the company violated federal workplace discrimination law when it fired Aimee Stephens, a transgender worker. The EEOC successfully sued on behalf of Stephens in that case, but the Justice Department has the sole authority to represent the government before the Supreme Court. The DOJ told the high court that the Sixth Circuit got the case wrong.

The U.S. Justice Department took the position Wednesday in a filing responding to a petition from Alliance Defending Freedom, an anti-LGBT legal group, calling on the Supreme Court to reverse a decision from the U.S. Sixth Court of Appeals finding transgender protections under Title VII of the Civil Rights Act of 1964.

Instead of either calling on the court to accept or reject the petition, the Justice Department asserts the Supreme Court should first make a decision on two petitions requesting clarification on whether sexual orientation discrimination is sex discrimination and therefore unlawful under Title VII.