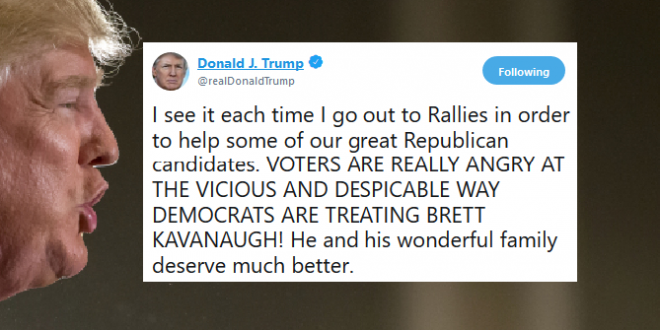 Stepping up his criticism of Democrats – and one of the accusers of Supreme Court nominee Brett Kavanaugh – President Trump on Wednesday again denounced critics of the judge, as both sides claimed the other was acting in a ‘despicable’ manner on the Kavanaugh nomination.

After staying quiet for the most part about Ford and her accusations, the President has stepped up his defense of Kavanaugh in recent days, as his remarks at a campaign rally in Mississippi on Tuesday night were by far his most direct attack on Ford, her allegations of sexual misconduct against the judge, and her credibility.

I see it each time I go out to Rallies in order to help some of our great Republican candidates. VOTERS ARE REALLY ANGRY AT THE VICIOUS AND DESPICABLE WAY DEMOCRATS ARE TREATING BRETT KAVANAUGH! He and his wonderful family deserve much better.