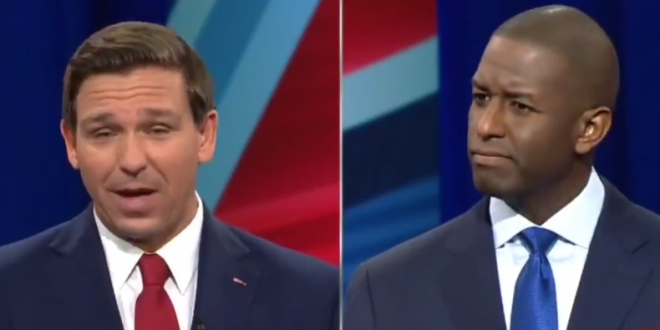 DeSantis Flails When Asked If Trump Is A Good Role Model For Kids, Talks About Jerusalem Instead [VIDEO]

The two scuffled on the economy, race, and, of course, Trump, who came up when moderator Jake Tapper asked DeSantis if he thought Trump was a good role model for children. The question was based in part on a DeSantis primary ad featuring one of his children stacking toy blocks as DeSantis exclaimed, “Build the wall!”

DeSantis responded by saying he thought Trump did the right thing by moving the U.S. embassy in Israel to Jerusalem. Gillum looked at Tapper and said, “I’m confused by the question.” “The question was whether or not he thinks President Trump is a good role model for the children of Florida,” Tapper said.

“That’s what I thought,” Gillum said, drawing laughter from the audience. “No, he’s not. Donald Trump is weak, and he performs as all weak people do. They become bullies, and Mr. DeSantis is his acolyte. He’s trying out to be the Trump apprentice. At every turn he’s tweeting him.”

This was the moment of the debate for me: @AndrewGillum gives the PERFECT reaction to DeSantis’ weird answer about Trump being a role model for kids. Perfect. And hilarious. #FLGovDebate pic.twitter.com/wP608iIxIA