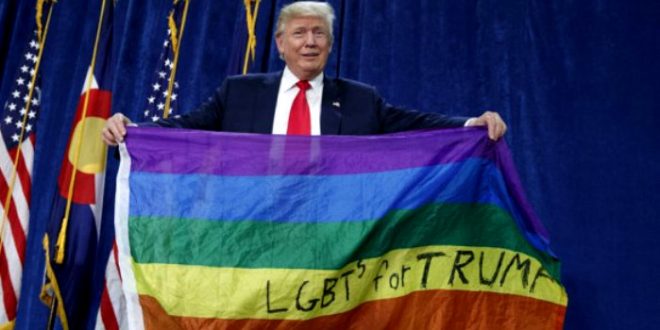 I don’t often post these kinds of press releases in full, but reminders of all these past and ongoing actions are worth your attention.

This weekend, the New York Times reported that the Trump administration has developed a proposal that would legally define gender as based solely on a person’s genitalia at birth, a significant setback to recognition of transgender individuals, as well as federal protections against discrimination in health care, education, and more.

This discriminatory action is just the latest assault on LGBTQ people and their rights since Trump’s inauguration. Despite running as an alledged “ally” of the LGBTQ community, Trump and his administration has engaged  in a deliberate strategy to undermine and eliminate protections for LGBTQ people.

Here are 15 things the Trump administration has done to roll back protections for the  LGBTQ community:

The Department of Health and Human Services is seeking to eradicate federal recognition and protection of transgender Americans by redefining gender to be based solely on a person’s genitalia at birth.

The State Department began refusing visas for same-sex partners of U.S. diplomats and U.N. workers if they are not married (even those from countries where same-sex marriage is not legal).

The Department of Health and Human Services is allowing health care providers to discriminate against LGBTQ people on the basis of “moral objection.”

Betsy DeVos and the Department of Education refused to protect transgender students from bullying and harassment.

The Department of Justice gutted policies that protect transgender people from employment discrimination.

The Department of Commerce removed sexual orientation and gender identity from the proposed 2020 Census survey.

Trump announced the “Deploy or Get Out” rule, which could remove HIV+ military personnel from service.

The Trump administration asked the Supreme Court to allow businesses to discriminate against LGBTQ people.

The Trump White House has yet to appoint an LGBTQ liason.

The Trump White House refused to acknowledge Pride Month for the second year in a row.