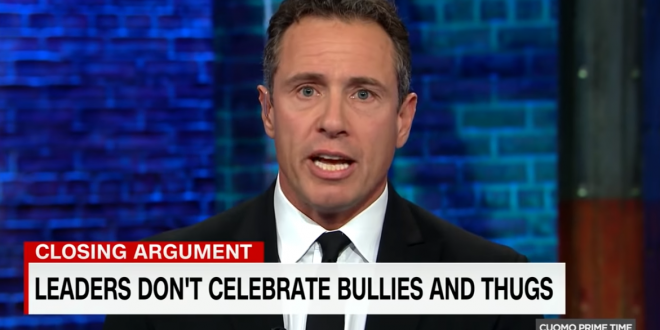 “There is no question about what he did being wrong and illegal,” CNN host Chris Cuomo said of Gianforte body slamming Guardian reporter Ben Jacobs in 2017. “But the president celebrated him at a rally. Why does Trump praise bullies? Time and again, he celebrates punks who go after the little guy,” he continued.

“Everything Gianforte did is weak, okay?” Cuomo later added. “He attacked someone who wasn’t a threat, was at every disadvantage, Gianforte showed no control, no confidence, no respect for his office or his constituents or for the law. He is weak. And if he doesn’t like it, he can come body slam me as well. I welcome it.”

Cuomo, not incidentally, is incredibly buff.