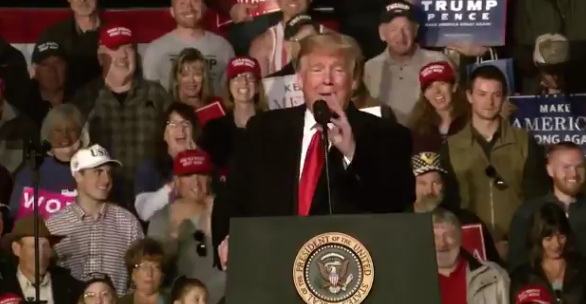 Donald Trump kicked off a western tour in Montana on Thursday ostensibly to support Matt Rosendale as he attempts to unseat Sen. Jon Tester, but it was his praise for Congressman Greg Gianforte’s physical assault on a reporter that stole the show.

“Any guy that can do a body slam, he is my type!” Trump said to cheers. “I was in Rome with leaders when I heard about it, and I heard that he body-slammed a reporter,” Trump said. Trump said he was afraid Gianforte would lose after the moment, but then recalled, “Wait a moment, I know Montana.”

Guardian US editor issues statement responding to Trump: “The President of the United States tonight applauded the assault on an American journalist who works for the Guardian.” pic.twitter.com/sSwUiBQo2J

Trump on Gianforte’s assault of @Bencjacobs — “I think it might help him, and it did.”

Big cheers in crowd as Trump mentions a reporter getting assaulted. Wow.

Trump’s comments mark the first time the president has openly and directly praised a violent act against a journalist on American soil. https://t.co/z72ZgUeyNo

Ready for this? Trump just hit a new low. While at his #MAGAmob rally tonight he praised GOP Rep Gianforte’s body slam of a journalist. He’s applauding the assault of a journalist. WaPo journalist Jamal Khashoggi was just assassinated. He’s giving a thumbs up to Saudi Arabia.

Trump: people who assault journalists are the best https://t.co/Ew8EbItCET pic.twitter.com/4WvKsFD1nq

Trump says “there’s nothing to be embarrassed about” when joking about Montana Rep. Gianforte’s assault of a reporter, as he mimes body slamming a person.

The crowd laughs and cheers pic.twitter.com/86coDdewhr