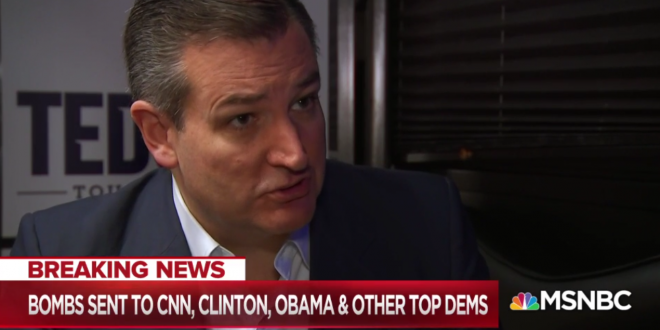 During an interview on his campaign bus with MSNBC’s Chuck Todd, Sen. Ted Cruz (R-TX) suggested that Democrats encouraged the political environment that led to multiple of their leaders being sent bombs in the mail on Wednesday.

Todd asked Cruz if President Donald Trump could have been stronger in his condemnation of the potential explosives that were mailed to Barack Obama, Hillary Clinton, Eric Holder, liberal investor George Soros and CNN Wednesday.

Instead of responding directly, the Texas Republican took aim at those who criticize the president. “The media always focuses on the president,” Cruz said. “There are too many Democratic politicians that are actively encouraging this.”

Trump backers who have suggested the bombs are a liberal hoax: