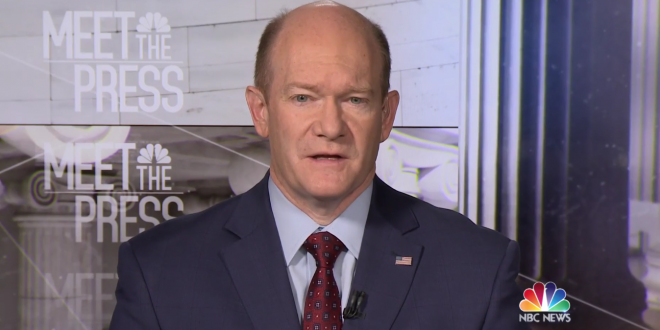 Coons: Too Soon To Talk About Impeaching Kavanaugh

“Frankly, we are just less than a month away from an election. Folks who feel very strongly one way or the other about the issues in front of us should get out and vote and participate. There’s only ever been one justice that’s been impeached and I think talking about it at this point isn’t necessarily healing us and moving us forward. The Senate’s role in our politics is not to just reflect the country, but to help heal and lead the country. And that’s the course we should be on.” – Democratic Sen. Chris Coons, speaking this morning on Meet The Press.

WATCH: Sen. @chriscoons tells Chuck that it’s “premature” for House Democrats to be talking about re-investigating or impeaching Kavanaugh if they gain control of the House in November. #MTP pic.twitter.com/MX8y2FjpQ3

“One of the biggest tragedies of this past week was to watch the President of the United States publicly mocking and ridiculing Dr. Ford,” @chriscoons says on Trump. “[It] really brought this entire conversation down and really was a low mark in his presidency.” #MTP