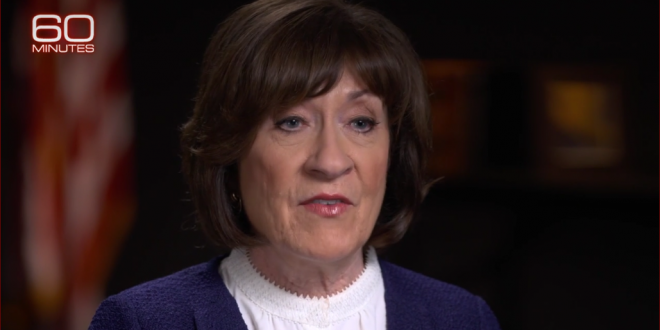 Collins On Kavanaugh: Activists Tried To Buy My Vote

Maine Republican Sen. Susan Collins on Sunday slammed opponents’ efforts to fundraise against her vote to confirm Brett Kavanaugh for the Supreme Court, calling them nothing more than blatant ploys to buy votes in a future election.

“They are asking me to perform an official act and if I do not do what they want, $2 million plus is going to go to my opponent. I think that if our politics has come to the point where people are trying to buy votes and buy positions, then we are in a very sad place,” Collins told CBS News’ “60 Minutes.”

“This is a classic quid-pro-quo as defined in our bribery laws,” Collins said in the interview.

As of this morning the fund has raised over $3.5 million for the still unknown candidate.