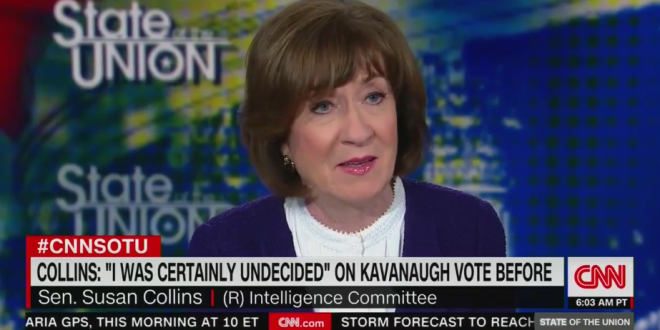 Collins: At First I Thought Kavanaugh Should Withdraw

Sen. Susan Collins told CNN’s State of the Union Sunday that she initially thought Brett Kavanaugh would have to withdraw after hearing Dr. Christine Blasey Ford’s “compelling and painful testimony,” but she changed her mind when Kavanaugh came back with a “forceful” denial. Collins said Kavanaugh “should not have taken a shot at the Clintons” during his testimony, a move that many critics have decried as too partisan for a Supreme Court justice. She said she has “full confidence” that Kavanaugh will not overturn Roe v. Wade.

Collins added that she’s not worried about losing her seat in 2020. A fundraising site for her opponent crashed shortly after her speech on the Senate floor and has already raised over $3 million.

Sen. Susan Collins: “After hearing Christine Ford’s very compelling and painful testimony, I thought…’perhaps he needs to withdraw’ but then he came back with such a forceful denial … led me back to the fundamental issues that are fundamental to our legal system” pic.twitter.com/g4MgIud1h8

“I felt that the President was not respectful to Dr. Ford. I have always been respectful toward her,” Sen. Susan Collins says #CNNSOTU https://t.co/JqXddSLIbY pic.twitter.com/vcdWHaYNZa

Previous Trump: Democrats Are Too Dangerous To Govern
Next Graham On Kavanaugh: “I’m As Happy As A Clam”