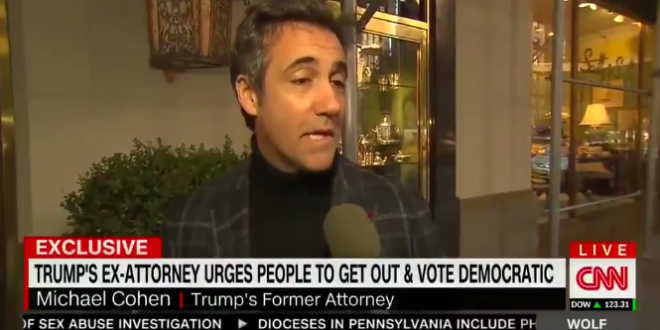 Cohen: Vote For Democrats And End This Craziness

Michael Cohen, Donald Trump’s former lawyer, pleaded with the American public on Friday to head to the polls and vote against the President and the Republican Party, predicting that if they did not, there would be two or six more years of “craziness.”

“Listen, here’s my recommendation. Grab your family, grab your friends, grab your neighbors, and get to the poll, because if not, you are going to have another two or another six years of this craziness,” Cohen told CNN in a brief interview outside of his Manhattan home. “So, make sure you vote. All right?”

Cohen’s remarks marked his first on-camera comments to the media since he pleaded guilty in August to eight criminal counts. Asked about that decision to change his party registration, Cohen told CNN: “I’ve been Democrat for pretty much my whole entire life. I switched because of a request of the RNC. Couldn’t be the vice chair of the RNC and be a Democrat.”

Previous Eric Trump Defends The Dotard’s Praise For Assaulting Reporters: This Is Actually Exactly Why My Father Won
Next Trump: Beto Wants To Turn Texas Into Venezuela