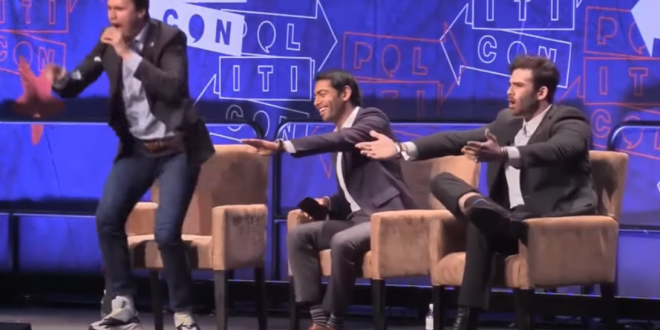 Charlie Kirk, head of college grievance network TPUSA, absolutely lost it on The Young Turks founder Cenk Uygur during a debate at Politicon. Kirk was stage on to debate Hassan Piker of Uygur’s progressive network, and challenged him to reveal his salary or “go live like a socialist.”

He then absolutely lost it when faced with heckling from Uygur. “I live like a capitalist every single day Cenk!” Kirk shouted. “I live as a capitalist, okay!” “Come on Cenk let’s go!” Kirk yelled at Uygur, who could be seen standing in the small crowd, yelling back at him.

You may recall that earlier this year one of Kirk’s college chapters wore diapers to ridicule safe spaces on campuses. Which totally owns the libs.

I asked him what his salary was. Same question he asked @hasanthehun. I want to know how much it took for the richest people in the country to buy his services. He claims he took a risk to start his organization. How much risk is there to do propaganda for the rich? https://t.co/0BXXOtM965