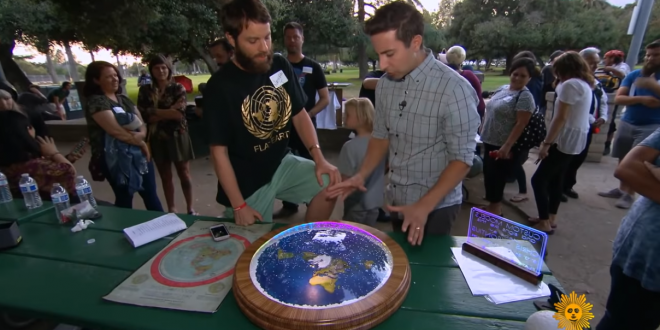 If you picture Earth as a ball spinning through space. the folks who recently gathered at a park in Arcadia, California, are eager to argue: you’re wrong! Earth is actually “flatter than a pancake,” said Nathan Thompson, part of a movement of people who call themselves Flat Earthers. They insist the Earth is, well, flat.

We’re living, these folks say, on a disk floating through space, with a tiny sun hovering just overhead. But what about the Earth’s curvature? “I don’t know. No one’s ever seen it,” said one man.

“The perimeter of Flat Earth is a wall of ice,” said Thompson. “That’s what’s holding in the ocean?” asked correspondent Brook Silva-Braga. “That’s what’s containing everything,” he said.

These lunatics get millions of views on YouTube with their clips “debunking” NASA, Galileo, and pretty much all of science. Watch the clip.