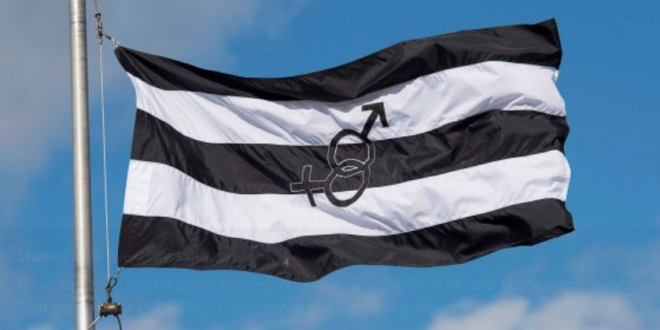 The man who petitioned the government of a small village in New Brunswick to raise a ‘straight pride’ flag says he’s disappointed the flag was later taken down. “Why should I not be allowed to fly my flag?” Glenn Bishop told CTV Atlantic. “That’s disgraceful. This is discrimination against straight people.”

The flag was raised Sunday, next to a main road in Chipman, N.B. It was lowered Monday following a swift public outcry. Bishop said he headed for the flagpole as soon as he heard about the lowering. He was confronted by several people who had been hoping the flag would be taken down.

“There’s no such thing as straight pride; we’ve always been accepted,” one woman told him. “When they flew their flag for six days, there was nothing said about it,” Bishop responded. Bishop said he was shocked at the reaction his flag received, adding that he is considering taking legal action against the village.

Chipman, NB resident Glenn Bishop asked village council to fly a “straight pride” flag and was upset when he learned it had been been taken down. Bishop went to the flag pole this afternoon where he heard from people who don’t agree with him. @CTVAtlantic pic.twitter.com/eyCmUUgXm3

A small community in New Brunswick is in the spotlight after flying what is being called a straight pride flag. It led to an honest conversation between those behind it and members of the LGBTQ community. #TheMoment pic.twitter.com/LWv3mOd1Ly

Have you ever seen a more depressing image in your life?! In case you weren’t aware…. That’s a Straight Pride Flag. Looks more like a prison uniform. https://t.co/nmH42oHgwY pic.twitter.com/WHyH9taK3N