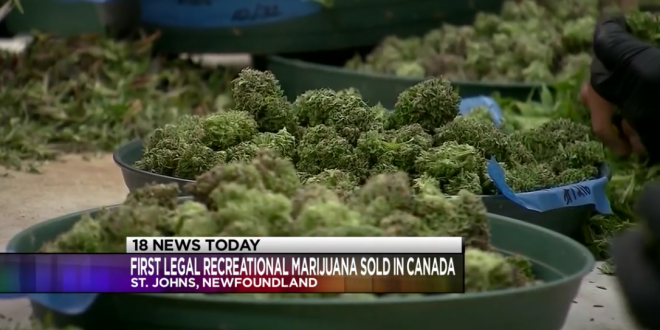 Marijuana sales officially began in Canada on Wednesday, making it the first G7 country — and the second country in the world after Uruguay — to legalize the drug for all adults.

Prime Minister Justin Trudeau campaigned on a promise to legalize marijuana, and his Liberal government delivered in the form of Bill C-45, otherwise known as the Cannabis Act.

While Trudeau cast the bill in a public health lens, in order to make marijuana more difficult for teenagers to access and erode black market profits, the global financial community is eagerly looking at Canada to see how legalization plays out.

Canada is planning to announce a pathway for people convicted of possession of cannabis to get criminal pardons, at the same time that the country is poised to become the largest in the world to legalize recreational marijuana.

According to multiple media reports in Canada, the country’s federal government will hold a press conference in Ottawa Wednesday morning to make the announcement, just hours after recreational pot becomes legal across the country.

Details on how the pardons will work have not yet been made public. News outlets have reported that records won’t be expunged, but that officials will outline ways for people who were convicted of possession of 30 grams or less to pursue a pardon.

People in Toronto gathered to watch the "bud drop" at the stroke of midnight, as Canada became the first major world economy to legalize recreational marijuana use https://t.co/rLwucJqTon pic.twitter.com/NChFEN3oG7