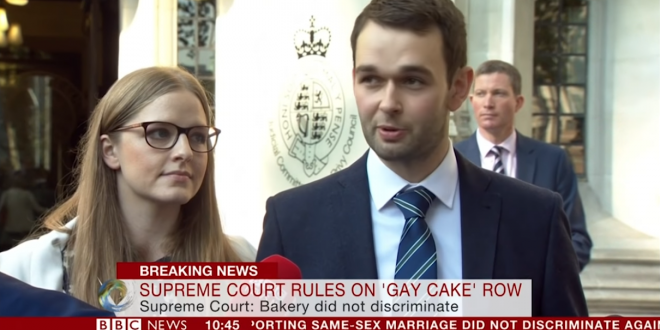 The Christian owners of a Northern Ireland bakery have won their appeal in the so-called “gay cake” discrimination case. The UK’s highest court ruled that Ashers bakery’s refusal to make a cake with a slogan supporting same-sex marriage was not discriminatory.

The five justices on the Supreme Court were unanimous in their judgement. The high-profile dispute began in 2014 when the bakery refused to make a cake with the slogan “Support Gay Marriage”. The legal battle – which has lasted four-and-a-half years and has cost nearly £500,000 so far – has raised questions over equality and freedom of conscience.

The first video below is from Britain’s leading anti-LGBT hate group, the Christian Institute.