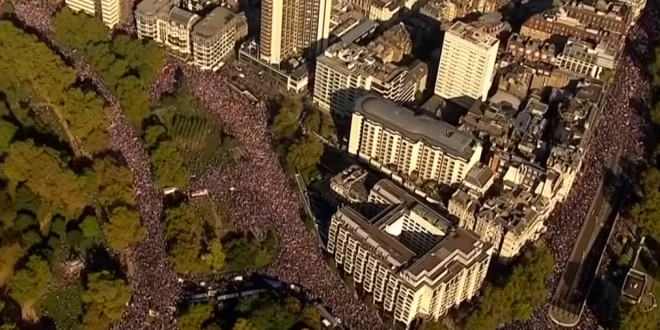 The centre of London ground to a halt as an estimated 700,000 people from all over the UK marched peacefully on parliament to demand a second referendum on Brexit. It was the biggest outpouring of public opposition to government policy since the anti-Iraq war protest in 2003.

The number who descended on the capital to call for a “people’s vote” exceeded all expectations of both the organisers and police. Addressing the crowds, which included dozens of MPs from all political parties, the TV personality and food writer Delia Smith said Brexit threatened to cause “unmitigated chaos”.

“The only way we can avoid this total madness and win back our future has to be a people’s vote,” she declared to loud cheers.

Amid the swathes of EU flags and banners, there was also a growing sense that campaigners, MPs and activists were realising, perhaps for the first time, that this was a battle that could be won.

To huge cheers, London mayor Sadiq Khan said the march marked a “historic moment in our democracy”. He told protestors: “We’ve heard some complain that a public vote would be undemocratic and unpatriotic. But the opposite is true.