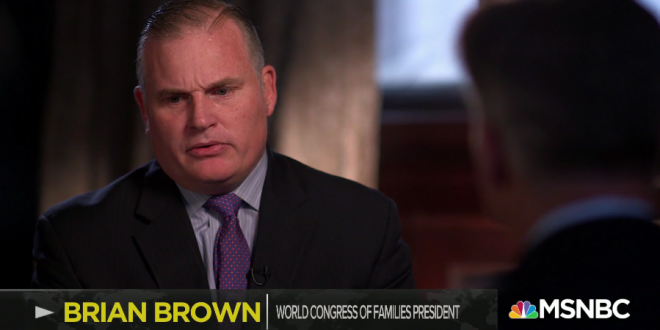 Brian Brown Brags About Exporting Anti-LGBT Hate: Nothing Wrong With It, I’ve Been To Over 40 Countries

Media Matters has a partial transcript:

ENGEL: You testified in front of the Russian parliament, the Duma.

BRIAN BROWN (WORLD CONGRESS OF FAMILIES PRESIDENT): It was a subcommittee, and I was asked to speak, and I willingly did. And I would do so again.

ENGEL: Why would an organization of American Christian conservatives be in Russia helping Russian lawmakers craft legislation for their country?

BROWN: There’s absolutely nothing wrong with it, and Russia is not in any way unique here. I’ve been to over 40 countries, and I have no qualms about going to these places.

ENGEL: But Brown’s organization does have a unique connection to Russia. It was conceived in Moscow in 1995 by an American, Allan Carlson, and a Russian, Anatoly Antonov, who we recently met up with.

ANATOLY ANTONOV (WORLD CONGRESS OF FAMILIES CO-FOUNDER): We came from different countries, different political systems. I was from the communist Soviet Union, and he was from anti-communist America.

ENGEL: What this secular Russian and the American evangelical Christian shared was a belief that homosexuals are a threat to society.

Watch MSNBC’s full 7-minute report here. The link to the full clip is on the bottom right of front page and it recounts the spike in anti-LGBT hate crimes after the adoption of the “gay propaganda” law pushed by Brown before the Duma.

“The Russians are coming, the Russians are coming.” The paranoia and propaganda coming out of the mainstream media against Russians just keeps growing. Proud to have friendships with Russian pro-family leaders like @alexeykomov We need cooperation and dialogue, not hysteria. https://t.co/AE8SBOI6vv