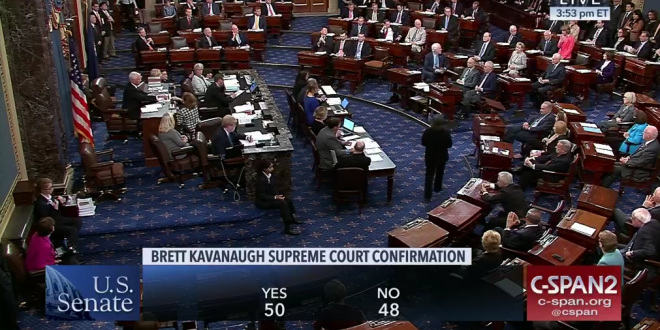 After arguably the ugliest such battle in the history of the country, moments ago the US Senate made its final vote, confirming Brett Kavanaugh as an Associate Justice of the United States Supreme Court. Collins, Flake, and Manchin voted yes.

Alaska Democrat Lisa Murkowski withdrew her no vote as a “courtesy” to Montana Republican Steve Daines, who is attending his daughter’s wedding and unavailable to vote yes. Her move only changes the final vote count, not the outcome. Updates shortly…..

The Senate confirmed Brett Kavanaugh to the Supreme Court Saturday afternoon, likely cementing a conservative majority on the court for a generation and bringing to an end months of bitter partisan feuding marked by shocking allegations of sexual assault and vehement and angry denials from the nominee.

The final vote was interrupted several times by protesters as senators sat silent at their desks for the formal roll call vote. “I do not consent, where’s my representation,” one yelled.

The confirmation marks a major victory for President Donald Trump, who will soon be able to take credit for appointing two conservative justices to the Supreme Court during his relatively brief time in office.

I have asked Steve Daines, our great Republican Senator from Montana, to attend his daughter Annie’s wedding rather than coming to today’s vote. Steve was ready to do whatever he had to, but we had the necessary number. To the Daines Family, congratulations-have a wonderful day!

I applaud and congratulate the U.S. Senate for confirming our GREAT NOMINEE, Judge Brett Kavanaugh, to the United States Supreme Court. Later today, I will sign his Commission of Appointment, and he will be officially sworn in. Very exciting!

VIDEO: The scene outside the Supreme Court when Kavanaugh’s confirmation was announced. pic.twitter.com/5SF7Q27TeF