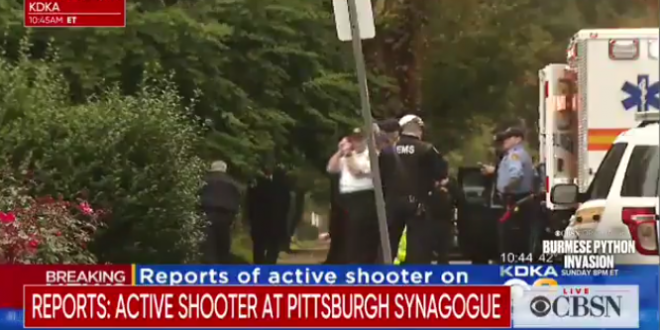 Police from across the city of Pittsburgh are responding to an active shooting situation at the The Tree of Life Synagogue in Squirrel Hill. There are reports that multiple people have been shot.

Police have requested that residents stay inside their home as they have exchanged gun fire with a suspected gunman. When officers arrived the gunman reportedly shot at them, forcing officers to use their vehicles as a shield.

The Synagogue was reportedly full of people for a Saturday service and police say they’ve received several calls from people barricaded inside the Synagogue.

#BREAKING: Police are responding to a reported active shooter at a #Pittsburgh synagogue, according to our CBS affiliate @KDKA.

ALERT: There is an active shooter in the area of WILKINS and Shady. Avoid the area. More info will be released when it is available.

At least seven people have been confirmed dead in a Pittsburgh synagogue shooting, and two police officers have been shot. The shooter is confined in the third floor of the synagogue https://t.co/rldHevHSsX pic.twitter.com/ltZqCMjYU6

We are still learning details about the shooting at the Tree of Life Synagogue in Pittsburgh but it is a serious situation. @PAStatePolice are assisting local first responders. Please stay away from the area and keep the congregants and law enforcement in your prayers.

Previous Trump Cultist: Obama And Hillary Sent The Bombs To Themselves To Bring People To Their Side [VIDEO]
Next PITTSBURGH: White Male Mass Shooter In Custody, Entered Shouting “All Jews Must Die,” Eight Fatalities