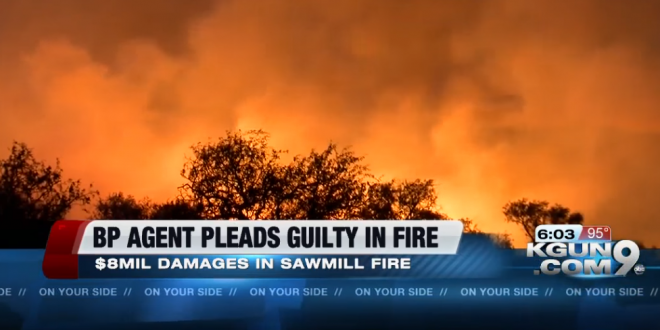 A Border Patrol agent pleaded guilty to starting an Arizona wildfire by shooting a rifle at a target intended to reveal the gender of his baby. Dennis Dickey, 37, of Tucson, Arizona, pleaded guilty Friday to causing the Sawmill Fire, which torched swaths of Coronado National Forest, federal land administered by the U.S. Forest Service, and caused more than $8 million in damage, according to the U.S. Attorney’s office.

Dickey accidentally started the fire by shooting a target filled with a color substance, which would burst out in pink or blue, depending on the sex of his and his wife’s child. Gender-reveal events, which have grown in popularity over the last decade, typically involve parents popping balloons, cutting into cakes, or doing other everyday tasks that reveal the color pink or blue, indicating the sex of their baby.

The fast-moving “Sawmill Fire” was ignited near Green Valley in April 2017 when Dickey shot a rifle at explosive powder inside a target. Dickey’s lawyer, Shawn Chapman, told the Daily Star that the incident happened during a party celebrating his wife’s pregnancy, and the target contained blue or pink powder to announce the unborn child’s sex. It also contained Tannerite, an explosive substance designed to detonate when shot at, according to a Department of Justice statement.

Authorities say the blaze spread to the Coronado National Forest and burned more than 45,000 acres of federal, state and private land. The damage was estimated to be more than $8 million. Dickey reported the fire immediately and admitted to starting it. He is scheduled to be sentenced Oct. 9. He will be ordered to pay $220,000 in restitution under his plea agreement.