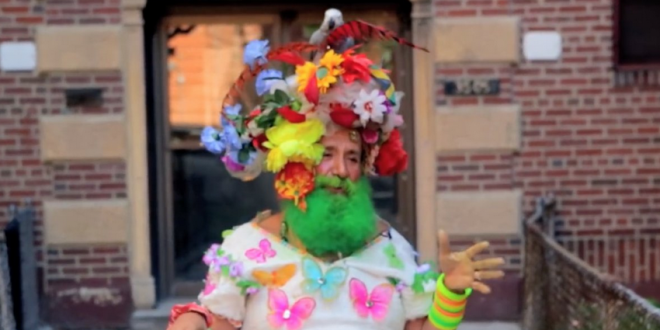 Ms. Colombia, a colorful and beloved figure in the Jackson Heights LGBT community, has been found dead, Council Member Daniel Dromm has announced.

Ms. Colombia, whose birth name was Osvaldo Gomez, was found dead in the waters off Jacob Riis Park, Dromm’s office said. No foul play is currently suspected, although the Office of the Chief Medical Examiner has yet to determine the cause of her death.

“She was beloved by all who saw her in the streets, at parades, and in the neighborhood wearing her colorful outfits and a bird on her shoulder,” Dromm said. “Her cheerfulness and ability to bring a smile to the faces of all who met her will be missed by all New Yorkers.”

Outside of major politicians, Ms. Colombia was arguably the most-photographed person at every pride parade.

Council Member @Dromm25‘s statement on the death of #MsColombia, a fixture in the Queens LGBT community pic.twitter.com/mD9kud2rGy

“I like to be free… They ask me, are you homo? Are you gay, are you lesbian? And I say, no, I am human being from another planet.”

Previous “God Particle” Physicist Leon Lederman Dies At Age 96, Was Forced To Sell His Nobel Prize To Pay Medical Bills
Next North Carolina Republican Leader Shares Fake Photo Of Ford, Implies She’s Too Ugly To Have Ever Been Raped