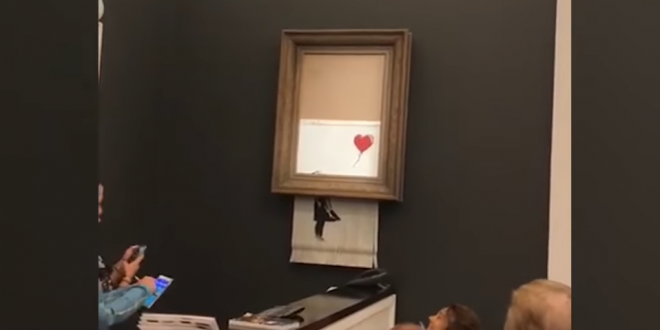 A stencil spray painting by elusive artist Banksy shredded itself after it was sold for more than £1m. The framed “Girl With Balloon”, one of the artist’s best known works, was auctioned by Sotheby’s in London. The piece which shows a girl reaching towards a heart-shaped balloon was the final work sold at the auction. However, moments after the piece went under the hammer, the canvas passed through a shredder that was hidden inside the frame.

Onlookers gasped and laughed after the bottom half of “Girl with Balloon”, one of Banksy’s best-known works, was sucked into a shredder hidden in its frame as the hammer fell, auction house Sotheby’s said. “It appears we just got Banksy-ed,” Alex Branczik, senior director and head of contemporary art, said in a statement on Sotheby’s website. Some art-market watchers have suggested the work could be worth even more in its shredded state.