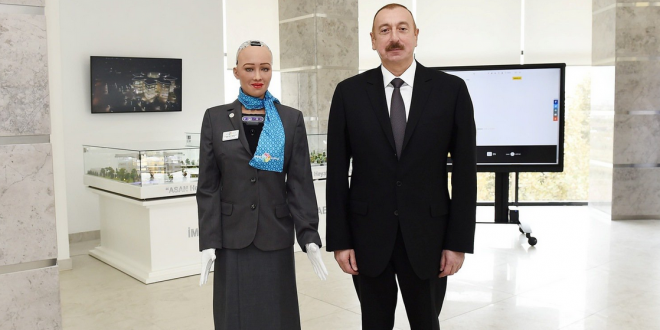 The AI humanoid ‘Sophia’ has been making a worldwide tour on behalf of her creator, Hanson Robotics of Hong Kong, and made an unexpected stop to the Caucasus this week. The Caucasus stop meant granting the world’s first ever visa granted to a robot, a process that took just two minutes thanks to some smart technology.

Sophia’s visit was organized by UN public service award winner ASAN (Azerbaijan Service and Assessment Network), a government agency in Azerbaijan; which has been reducing the bureaucracy by creating one-stop centres for delivering services to the public.

The agency recently took over all the country’s e-government initiatives – no mean feat although in Azerbaijani, the word “asan” means easy. To underscore its electronic kinship with Sophia, and its prowess at delivering e-government services, ASAN issued her an electronic visa upon her arrival at Baku International Airport in the nation’s capital.

Media and tech darling Sophia, the world’s most famous humanoid robot, came to Azerbaijan and had a short but awkward exchange with President Ilham Aliyev, drawing mirthful reactions from Azerbaijanis.

“Mr. President, I am pleased to meet with you. I came yesterday and Azerbaijan has amazed me. I have seen Baku’s unique architectural style, modern buildings and other technological achievements,” Sophia said. “Despite your busy schedule you have visited Azerbaijan and it pleases us very much,” Aliyev responded in English, adding a pitch for ASAN. “We are opening together with you a new ASAN center. It is also innovation and it reflects our capacity and intention to build up our modern country.”

The exchange, predictably, was a bit forced, and evoked a good deal of mockery among Azerbaijanis. Elmar Imanov, a Germany-based Azerbaijani filmmaker, posted a video of the interaction on Facebook with the caption: “Find the robot.” Some saw Sophia’s obsequiousness as appropriate for the context. “The poor robot knows that the only way to survive in Azerbaijan is to praise,” said one Facebook user.

Great to see @Thinkingheads #speaker and #worldwide #phenomena Sophia the Robot amazing the audience @InfluencerDay in Azerbaijan yesterday. To contract Sophia for your next event more info @ https://t.co/VZ0Ou88Uv5 pic.twitter.com/QOacrPKApS

Azerbaijan is a young country with a huge potential to transform into a regional innovation hub, #Sophia The #Robot, the most advanced artificial intelligence in the world said at the opening of the Global #Influencer Day in Baku on Oct. 27.https://t.co/JJ10IfJmX7 pic.twitter.com/tlSEgEm8cc