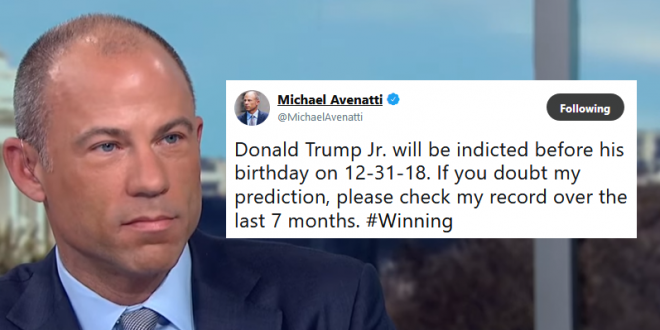 Avenatti: Junior Will Be Indicted By The End Of 2018

We’re not holding our breath, but fingers crossed:

Just two days ago, attorney Michael Avenatti tweeted that Donald Trump Jr. will be indicted, in a response to a tweet that Trump Jr. made mocking the idea that Avenatti could run for President.

This garnered a lot of attention from the public, as Avenatti has consistently been a thorn in President Trump’s side over the past couple of years.

Now, Avenatti is taking his prediction a step further, with another tweet this morning, adding details to his claim that Don Jr. will eventually end up with criminal charges on his plate.

Donald Trump Jr. will be indicted before his birthday on 12-31-18. If you doubt my prediction, please check my record over the last 7 months. #Winning

Previous State Television Pulls Back On Airing Trump Rallies
Next Michelle Obama On Running For Office: Absolutely Not