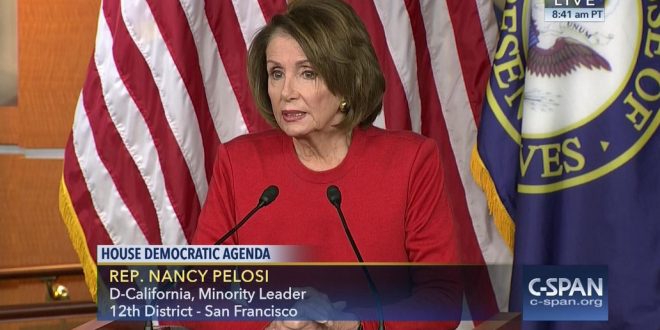 Minority leader Nancy Pelosi said she would introduce the “Equality Act” as one of her first orders of business. Pelosi spokesman Drew Hammill told The News Tribune the legislation will be given a low bill number, meaning it will be one of the first issues addressed by Congress if Democrats retake the House in November.

Mary Beth Waddell, a senior legislative assistant for the Family Research Council, says the Equality Act is basically government-sanctioned discrimination against religious people. “What the Equality Act does is it turns it on its head and allow the government to impose a belief system about sexual decisions and sexual behaviors on the nation,” Waddell said.

From the Heritage Foundation’s Daily Signal:

The Heritage Foundation has long opposed the expansion of anti-discrimination laws to elevate “sexual orientation” and “gender identity” as protected classes. Where enacted, these laws—known as SOGI laws—are frequently used as swords to persecute people with unpopular beliefs, rather than as shields to protect people from unjust discrimination.

Part of the problem with these laws is that they treat reasonable actions as if discriminatory. Rather, they trample First Amendment rights and unnecessarily impinge on citizens’ right to run their local schools, charities, and businesses in ways consistent with their values. These laws do not protect equality before the law. Instead, they grant special privileges that are enforceable against private actors.

Instead of treating disagreement as if it were discrimination, Americans of all walks of life must strive to peacefully coexist even when we don’t see eye to eye. How sad that Pelosi has already announced her intention to legislate division and punish disagreement.

Articles similar to those linked above have appeared on multiple right wing sites this week, so clearly the alarm has gone out. Not incidentally, this is also evidence that the Christianists believe the House is lost.

The Equality Act presently has 198 sponsors, only two of whom are Republicans. Its chance of passage by the Senate is likely slim and overcoming a veto by Glorious Leader is even less likely. But fight we will.