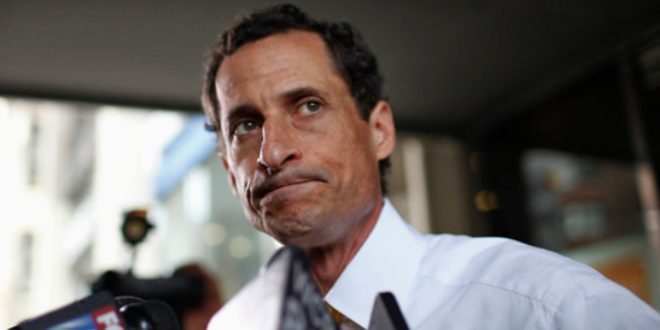 Disgraced former U.S. Rep. Anthony Weiner is set to get out of prison earlier than expected. Weiner, who was sentenced to 21 months behind bars, is scheduled to be released three months early, Federal Bureau of Prisons records show. Online records show his release date as May 14, 2019. Weiner has reportedly been a model inmate while incarcerated at the Federal Medical Center in Devens, Mass.

In 2013, he lost his bid to become NYC’s mayor when it emerged he had been continuing his sexting with strange women through the pseudonym “Carlos Danger.” Weiner didn’t hit rock bottom, however, until he admitted in court last year to sexting with a high school girl — despite knowing she was a minor. His long-suffering wife, long-time Hillary Clinton aide Huma Abedin, filed for divorce hours after he pleaded guilty in court. Weiner begged for probation at his September 2017 sentencing, calling himself “a very sick man” as he wept.

There’s no parole in the federal prison system but inmates can earn up to 54 days of credit per year for good conduct.

Previous Payback For Neo-Nazi Robocaller: Accordion Clowns
Next Trump: Ivanka Would Be “Dynamite” As Ambassador