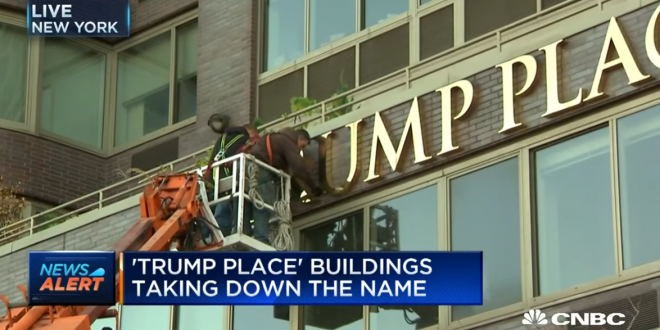 Another NYC Building Rips Down Its “Trump” Name

Residents of Trump Place on the Upper West Side of Manhattan have joined three other buildings in the neighborhood in stripping the president’s brassy five-letter name from their 46-story building in another sign that the brand is losing some of its appeal.

In May, a judge ruled that the Trump Organization was wrong in asserting a contract that obligated residents to keep the name. That freed the way for a formal vote and, in a poll that ended Oct. 10, nearly 70% of owners who voted said they wanted to change the name.

After more than a quarter century, Trump Place will now be known only by its address, 200 Riverside Boulevard. In addition to three other New York condos, Trump’s name has also been removed from hotels in Toronto, Manhattan’s Soho neighborhood and Panama City since he became president.