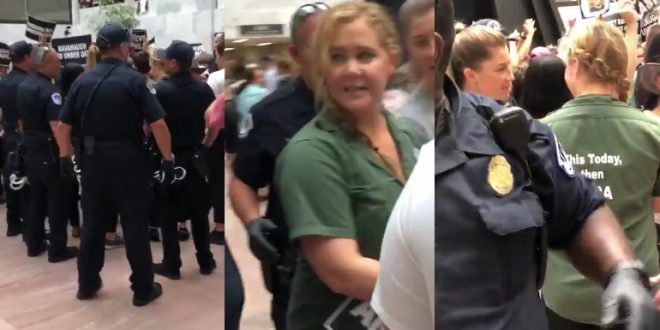 Amy Schumer had a hunch she would get arrested protesting Supreme Court nominee Brett Kavanaugh in Washington. She was right.

The comedian, 37, was among dozens of demonstrators detained in the Hart Senate Office Building on Capitol Hill Thursday. Earlier in the day, Schumer attended the #CANCELKAVANAUGH protest outside the E. Barrett Prettyman Federal Courthouse.

In a video posted to Twitter, a Capitol police officer asks Schumer and other demonstrators if they want to be arrested, including the camera man. Schumer confidently answered, “Yes.” She was holding a “We believe Anita Hill” sign while wearing a green top with “This today, then #ERA” emblazoned on the back.

Here is @amyschumer telling cops she *wants* to be arrested.

Cop asks “Do you want to be arrested?”

Save this for the “I can’t believe I was arrested for free speech!” Tweet from her soon. pic.twitter.com/TLGaDAyh1T