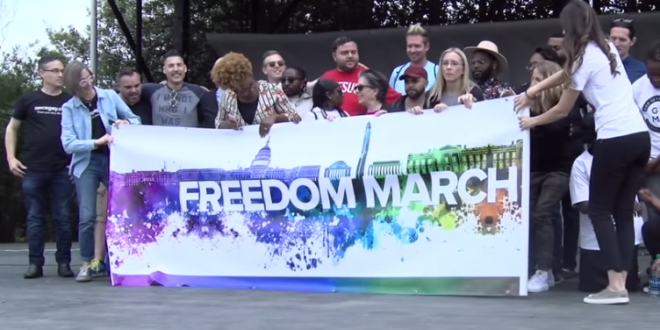 Alleged Ex-Gays To March Against Gays Because Jesus

A newly created group of former LGBTQ identifying Christians plan to march in cities throughout the nation to provide community for and public awareness of those who have shed their LGBTQ identity to follow Jesus Christ. They call themselves “Freedom March,” and are holding an event in heart of Los Angeles on November 4th. Press is encouraged to attend.

“I was transformed through the grace of Jesus and found that others have been as well,” Freedom March founder Jeffrey McCall said. “These marches are a way to ensure that others who have overcome are not feeling isolated and alone.”

The November 4 march in Los Angeles and subsequent event will provide a platform for former LGBTQ individuals to share their stories. One of those individuals is Pulse Nightclub survivor Luis Javier Ruiz, who is planning Freedom March in Orlando next year. “I’ve always said it’s not about gay to straight. It’s about lost to saved,” says Ruiz.

Their website invites your “seed” to help them grow.

VIDEO: It appears this is the same group that marched earlier this year in DC where speakers included the so-called Activist Mommy, an anti-LGBT nutbag and mother of ten who advocates for criminalizing homosexuality. As with NOM’s marriage marches, the DC event only drew a couple of dozen attendees.

On her FB page nutjob @activistmommy1 says no one is “courageous enough” to arrest gays for sodomy. LOL.